A big update of Trust.Zone apps

We have just updated our VPN service with a lot of new security things on April 30.

We add more data protection to our users! The newest encryption algorithms, new extra layers of security will be added for all our VPN servers and locations.

No actions needed if you use TrustZone for Windows.

No actions needed  If your are using L2TP/IPsec connections for any OS or device.

For other OS - you may be asking to upgrade TrustZone app or update your configuration OpenVPN files. 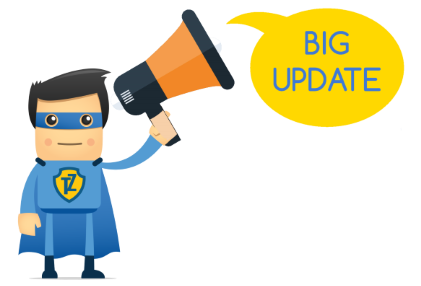 - If you are using our OpenVPN Android App like OpenVPN Connect or similar  and you cannot connect - go to manual setup page, choose your Android OS, protocol OpenVPN, your server and follow the instructions. You will be prompted to replace your current OpenVPN congiguration files with new config files.

Here is an example -how to install OpenVPN protocol for Android

Keep in mind, that Trust.Zone has also official TrustZone App at Google Play store.  We recommend using our official Android App to get complete protection. Moreover, it's much easy to use than external software.

If you don't want to use official Android App - we recommend using WireGuard protocol with Trust.Zone. WireGuard a modern VPN protocol which is more secure and faster than OpenVPN. Here is simple instruction how to use WireGuard with TrustZone for Android.

iOS (iPhone, iPad and other)

If you are using the latest Trust.Zone iOS app - no actions needed

If you are using manual OpenVPN connection, OpenVPN Connect at Apple App Store or similar  and you are unable toconnect - go to manual setup page, choose iOS, protocol OpenVPN, your server and follow the instructions. You will be prompted to replace your current OpenVPN congiguration files with new config files.

If you want more security with VPN for your iOS  - use WireGuard protocol for your iOS device. WireGuard a modern VPN protocol which is more secure and faster than OpenVPN. It's recommend by majority secutiry experts in 2021.  Install Wireguard app from the AppStore, run it and import TrustZone WireGuard configuration file

- If you are using  Tunnelblick or similar apps to connect Trust.Zone via  OpenVPN protocol on MacOS and you cannot connect - do the following:

(if you are still unable to connect - uninstall Tunnelblick, reboot your Mac, then repeat all points above)

Need more security with VPN for your MacOS? Use WireGuard protocol from TrustZone. It's more secure and faster then OpenVPN.  Install Wireguard app from the AppStore, run it and import TrustZone WireGuard configuration file

Example: How to connect to TrustZone VPN server with OpenVPN protocol for Linux Mint

It worth saying that the most recommended VPN protocol for Linux and Ubuntu in 2021 is WireGuard (which is also supported by Trust.Zone), simple, secure and fast VPN protocol. WireGuard is faster than OpenVPN. Here is an instruction how to set up WireGuard for Ubuntu.

- For routers - follow the corresponding manuals: DD-WRT, Roqos Core VPN, Tomato and other

5 Ways How to Protect Your Privacy on Social Media7 Reasons You Should Use a VPN in Japan10 Hidden Features of Trust.Zone VPNVPN vs. DNS: What is the difference?5 Security Apps To Keep Your iPhone Safe You Didn't KnowDoes Trust.Zone VPN protect users from DNS Leak and WebRTC Leak? Definitely, YES

PROMO CODE for Trust.Zone VPN. Today only!How Fast is Trust.Zone? Speed Tests from VPN Review Websites5 Things You Didn’t Know You Can Do with a VPNTrust.Zone is Now Supporting WireGuard ProtocolHow to Install Trust.Zone VPN WireGuard for Your Android Device